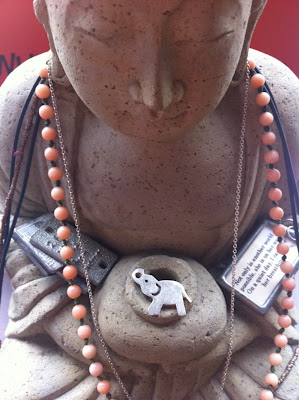 I wrote the other day about how I lost the elephant bracelet I'd been wearing since the day I found out I was a match. I thought about ordering a new one, but it wouldn't be the same. I started wearing the bracelet Jon had been wearing, one of the 18 I'd made for friends and family, but that's not the same either.

I missed mine. It symbolized a link, a hope, a period of time that was intense and profound and life-changing.

And then yesterday, as I hung my ganesh necklace around the buddha statue it stays on at night, there it was. The elephant. My elephant. Lying there as if it was a gift on an altar.

I have no idea how it got there. No one here is owning up to finding it and leaving it for me.

But somehow, that little symbol found its way back.

I'm attributing it to transplant karma.
Posted by Unknown at 1:37 PM 2 comments

to be a donor

Yesterday, on twitter, a potential kidney donor wondered if it would be ok to ask me some questions. I sent her my email and last night heard more of her story. At the moment she's at one of the unexpected roadblocks that, in retrospect, are inevitable in such a complicated process. But, what she was really concerned with was facing surgery and the fears that go along with it.

The day before my surgery, while dropping my brother off at the hospital - they wanted to fit in one last dialysis session - I told him how the thought of the many thousands of people how were operated on and were fine was helping me deal. He answered: yes, but how many people choose to go through surgery solely to help someone else?

And so, for us, there are things on the table most people never have to face.

Like going into an operating room as an exceedingly healthy person, knowing you'll feel like hell on the other side. Accepting that you'll be giving up an integral organ, permanently. Knowing that your actions will change, if not save, someone else's life.

There are, at least there were for me, profound emotions and experiences that went along with donating. I have two still pretty young kids and a husband whose feelings and fears went into the mix. Friends and family, people close and almost strangers who called me everything from a hero, a saint, a life-saver, an inspiration, to whiny, selfish and overly-dramatic. One woman asked how I could possibly do this as one of my children might need a kidney in the future. Someone else wondered if I ever considered all that could go wrong, like not waking up after surgery. More than one donor told me to suck it up and shut up as my words might discourage potential candidates from being tested. And then others would look at me with tears in their eyes, astounded at what I was taking on.

Every experience is different, every donor's reactions unique. You can't imagine how you'll handle it until you're in it. But it changes you. Forever. Just the generosity of being tested, of contemplating this gift, is huge. Strangers I found on facebook and twitter, who've been down this road, made a profound difference to me.

And if I can pass on that donor karma, I'm grateful.
Posted by Unknown at 3:12 PM 0 comments

A couple of hours ago, as I was picking Jack up at camp, I walked, fast, to avoid the rain.

Then I realized: I was walking fast. Fast. My normal NYC, going places, quick paced fast.

And I felt fine.

This past weekend I was at a wedding in Maine. Nervous beforehand that I wasn't up to the trip, I survived the endless car trip, driving hours myself. I explored new towns. Went to the beach, twice, in a bikini no less. Swam in the frigid ocean. Played football catch with Jack. Shopped with Iz in 101 degree heat. And danced for hours. And hours. All without the usual midday nap my body's been craving post-surgery.

Not to say I didn't crash. I did. There were times I was so tired I couldn't talk, could barely hold my head up. While driving I felt fatigue creeping up and had to pull over within minutes as I knew I shouldn't be behind the wheel anymore. And I've noticed that my energy for chit chat isn't back to where it usually is. It's exhausting to be up and talkative—at the wedding I spent much time sitting alone, hidden from the party. And that was ok too.

Seven weeks out I almost feel like the surgery didn't happen. Aside from the scars, which are healing very nicely, I feel fine.

My brother does too.